Reclamation and the Tenant Interim Lease (TIL) Program. 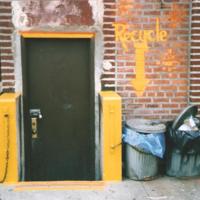 The recycling area sits outside 161st Street and Melrose Avenue. This was in 2003. 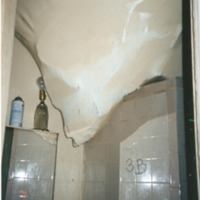 This is an example of the water damage in the 161st Street and Melrose Avenue building prior to its full reconstruction. The photo was taken in 2002. 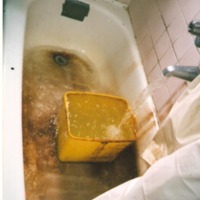 This tub faucet ran for 9 months before city contractors attended to it. 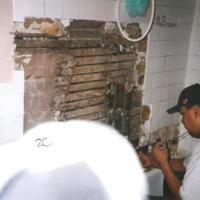 Greywolf moved into 161st St. and Melrose Ave, what is now known as the ‘Urban Reservation', in September of 1981.  This was the fifth residence he had occupied since his arrival to the South Bronx in 1974.  The slow decrepitation of this residence resonated with experiences he had had with past buildings; a pattern of negligence that would allow landlords to collect building insurance and eventually abandon the building, “when I moved into the building I am in now, when I saw the degradation, I just knew, I was like ‘man … I’m going to have to move again’ because this place is on the way out, you know?” (4).

The superintendents of this residence proved themselves increasingly incompetent at building management, and the residents of 161st St. and Melrose Ave. braced themselves for what they assumed would be another forced relocation when they received a visit from the city representative, “Charles Fonte… he came from the city and he talked about, if we managed the building successfully, it would be renovated and then we’d own the building… all of these outlandish promises!”  What seemed to be the "outlandish" prophecies from the City would be a not too far off reality, but due to what these residents had faced regarding their living situations, they remained initially skeptical of the veracity behind this government official's statements, “So after [the meeting], we talked and we said ‘well, you know... they’re going to take this building, they're going to do this, they’re going to do that’, you know [there was] a lot of dissension… we’re used to the government promising us things and taking it away from us.  So what we said, Uku Littlehawk, myself and Tommy Blackhorse, was, ‘okay… they said we could run the building, so let’s do everything that they say so that if anything happens it’s not because of anything that we did” (4).

During their meeting with the City, residents of 161st St. and Melrose Ave. were informed about the Tenant Interim Lease Apartment Purchase Program (T.I.L) - an initiative that “assists organized tenant associations living in city-owned buildings to develop economically self-sufficient low-income cooperatives where tenants purchase their apartments for $250.  Tenant associations enter into a lease with the City to maintain and manage the buildings they live in” ("Tenant Interim Lease Program").  The T.I.L program was the "precursor to the HDFC (Housing Development Fund Corporation) program", through the HDFC program, tenants were able to purchase their leased apartments (4).  the T.I.L program works to train members of tenant associations in the practice of building management, "they had us go through courses.  What they call ‘UHAB university’ the Urban Homesteading Assistance Bureau, and, they ran classes on how to properly manage the property, so we took those classes, you know, got diplomas" and trained on "building management, maintenance and financial recordkeeping" (4)(5).  The TIL program is meant to function in a way where, the city will take ownership of the building and complete rennovations, and the TIL program website claims that "City and Federal sources utilize private construction management firms to supervise the work" that goes into rehabilitating the building during this time (5).  Greywolf's experience was slightly different in that, himself, Tommy Blackhorse, Uku Littlehawk and other tenants and friends completed essentially all of their apartment's rennovations on their own (including installing sheetrock as insulation and painting the apartment's halls on their own)(4).  Other tenants within the building were "lackadaisical" about pursuing the skills needed to manage, and were simply looking to be "comfortable in the apartment, and that's pretty much as far as it goes" which left the responsibility of building maintenance and management to Greywolf, the Treasurer and Managing Agent and Uku Littlehawk, the Urban Reservation HDFC Cooperative Board President.

Nathaniel Muller was the lawyer which Greywolf and fellow Cherokee, Uku Littlhawk, hired through the T.I.L program to the HDFC.  Both Nathaniel and his law partner Michael Brown were "invaluable" to the success the tenants of the Urban Reservation met with (4).  The dday that Greywolf, Uku Littlehawk and Phillip Booker, and their  succeeded in claiming ownership of their building was quite hectic, "I remember when we actually went to go purchase the building, you know, it was just so chaotic.  There was this oblong table and all these people were at it, ‘I need this much money for this!'  'I need this, I need that!'  'Insurance ! Water!’, you know ‘property tax!’, it was a bunch of different things.  And, so Nathaniel told us ‘don’t sign anything until I tell you to sign it, don’t do nothing until I tell you to do it’.  And so, in half an hour, it was all over.  And, we just looked at him, and we said ‘what just happened?’, and he goes, ‘well, you guys own the building now’, and so we’re like , ‘okay.’

In their successful navigation of the TIL program and of bureaucratic channels of City government, Uku Littlehawk and Greywolf refused to succumb to the involuntary submission of their home, instead reclaiming their home - a space which was at threat of again being lost.  In their reclaiming these men stemmed a pattern of land-grabbing that dominates a history of the U.S. and has come to confine and marginalize specific groups within the Untied States.

← A History of Building Abandonment in the South Bronx.
Whose Sweat Reaps the 'Equity' of 'Sweat Equity' organizations? - A Conclusion. →
Reclamation and the Tenant Interim Lease (TIL) Program.