Whose Sweat Reaps the 'Equity' of 'Sweat Equity' organizations? - A Conclusion.

Greywolf and Uku Littlehawk's reclamatory success is laudable for a myriad of reasons - the physical labour which they put into creating a home that would not disintegrate, being in "constant communication" with the city workers who managed the T.I.L program and in the leadership roles they took on in order to ensure a home for themselves and their fellow tenants.  Greywolf described other tenants as relatively "lackadaisical" (or maybe afraid of what was to transpire) regarding their desire or ability to give their time to the responsibilites which followed the training through the Urban Homesteading Assisting Board (UHAB) that readies tenants to manage and maintain their buildings (5),

"A lot of the people... wanted the apartment, they were comfortable in the apartment and that’s pretty much as far as it goes.  But, you know, we look at it a little differently.  We look at it as, if something happened, then we failed.  And, we look at it as ‘we can not fail’, because if we fail where are we going to go?  We have nowhere to go.  And that was our message after the first meeting, we were telling the rest of the people in the building, we said... ‘okay,  we all think this building is going to get abandoned why don’t we just pack up and go move into other buildings?’  And, people looked at me like I’m stupid, they said ‘what do you mean?  With what?’, and I said, ‘that’s right.  With what?  We don’t have nothing.  We can’t go nowhere.  So we have to, you know, protect this as much as we can’.  And um, yea that’s pretty much what we did" (4). 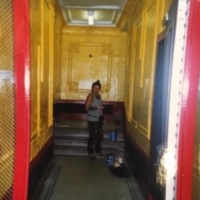 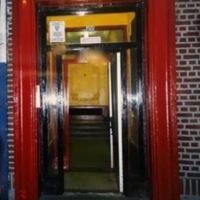 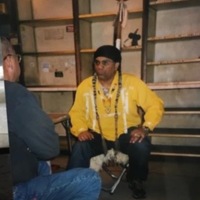 Uku Littlehawk, president of the Associated Cooperative Board, in a tenant association meeting. 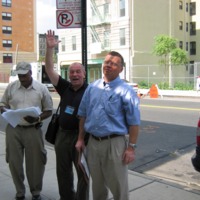 The architects who assisted in the reconstruction of the Urban Reservation 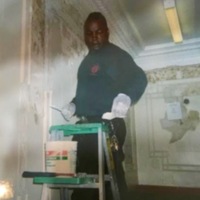 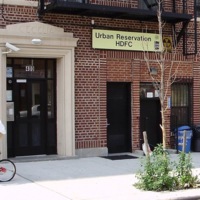 Facade of the Urban Reservation.

Greywolf and Uku Littlehawk built a home for themselves and their fellow tenants, despite both parties' skepticism of the City government's genuinity or their ability to actually deliver on the deliverables of the T.I.L program - the secure ownership of their building.  Their work emulates the work of other “sweat equity” groups, organizations of South Bronx residents who worked to "protect and rehabilitate their buildings, build new housing and fix abandoned structures" (2).  The People’s Development Corporation (PDC) was formed in 1974, the year Greywolf and his Great Aunt moved to the South Bronx.  PDC "took over a vacant, city-owned apartment house in the Morrisania section of the South Bronx, secured rehab loans, and restored it completely with oak floors and solar panels" making it an enduring, sustainable place for its residents.  The Banana Kelly Community Improvement Association is another group demonstrative of sweat equity groups' resiliency, and was founded in the late 1970s, campaigning under the slogan "Don't Move, Improve!" (also PDC's slogan).  In 1977 Banana Kelly prevented the demolition of three buildings on Kelly St. in the South Bronx (2).  The Banana Kelly Association and PDC echo the actions of Uku Littlehawk and Greywolf in their adamancy to restructure a system that denied residents of the South Bronx the the ability to imagine a future of sustainability, not abandonment.  The work of 'sweat equity' community organizations and tenant associations working through the T.I.L program realigns a notion of 'success' that the “city bureaucracy and financial establishment” impose, one that is contingent on marginalizing bodies who do not fit with a corporate, marketably profitable future, one which excludes those fighting adamantly to remain in their homes (2)(6).

The activism of thes two men ensured a future for themselves and the other tenants of the Urban Reservation HDFC.  Their efforts and labour ensure the sustained existence of a building that is their home.  Systemic inequities were what led to the "racial disorders" of the 1960s, and a "crumbling" of the communities in the South Bronx in the 1970s.  PDC, Banana Kelly, Greywolf and Uku Littlehawk all work towards subverting the inherently discriminatory nature of institutional power within the United States.  In their navigation of the T.I.L and HDFC programs, these two men took on positions of leadership within the Urban Reservation HDFC Cooperative, reclaimed their space, remade their home, and reconstructed the conception that the South Bronx is a borough of abandonment and displacement.  The building was saved by the remaining tenants that would not go because they had no where to go: Panzarino Family, Bower Family, Iglesias Family, Bartlett Family, Santiago Family, Marrero Family, Uku Littllehawk, Greywolf.  They reserve and protect a space that was entirely "Reserved for us, and belonging to us, the Urban Poor- 161 Street and Melrose Avenue, the Urban Reservation HDFC" (4).

← Reclamation and the Tenant Interim Lease (TIL) Program.
Bibliography →
Whose Sweat Reaps the 'Equity' of 'Sweat Equity' organizations? - A Conclusion.