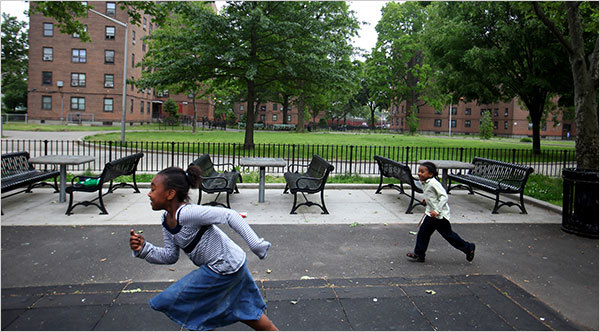 Kids making use of public space in the South Bronx. 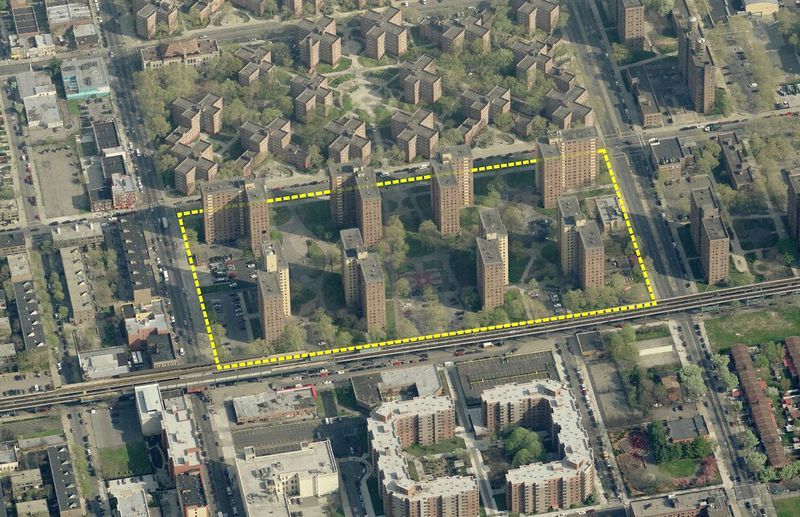 In public housing developments, design is often utilized as tool for control. The “tower in the park” model is panoptic and people are consolidate people into high-rises with more easily patrolled hallways. Public space formally decided by urban planners, looking at space from a bird’s eye perspective. Most public housing spans superblocks which isolate them from the rest of the neighborhood. As a result of this planning, there is little opportunity for creative or spontaneous use of sidewalks, street corners, or building stoops.

Other design elements such as floodlights contribute to this sense of spacial surveillance and isolation. Under the de Blasio administration, emphasis has been put on making public housing safer, citing floodlights and the new police strategy, “Omnipresence” as solutions. Officers are to stand on street corners and take a less confrontational approach to policing. Yet, “Omnipresence” implies that NYCHA residents are being monitored at all times. Mayor de Blasio’s attempt to increase safety fails to address the social, political, and economic factors that have assigned “danger” as public housing defining characteristic. There is historic precedent for using light for surveilling communities of color. A In 1713, New York City instituted a “Lantern Law” stating that slave must carry a lantern to announce their presence. In her book Dark Matters: On the Surveillance of Blackness, Simone Browne states, “We can think of the lantern as a prosthesis made mandatory after dark, a technology that made it possible for the black body to be constantly illuminated from dusk to dawn, made knowable, locatable, and contained within the city.” Light is used as tactic for control and strips individuals of their right to privacy.

If architecture and planning has the power to reinforce surveillance and segregate communities, it surely has the power to do the opposite, to foster community and to integrate the public and private. A recent exhibit at the Cooper Hewitt entitled By the People addressed the ways in which more equitable America can be achieved through design. Of the projects featured, one stood out to South Bronx activist Monxo Lopez—a Superblock Retrofit of eight public housing buildings in Brownsville, Brooklyn. The project would create pathways, circulation, and greenery throughout the development, integrating it into the fabric of the neighborhood. A similar approach could be taken in the South Bronx.

[5] Chiel, Ethan. New York City has been shining surveillance lights on its black population for the last 300 years. Fusion. 19 May 2016.

[7]Paliza-Carre, Sophia. Searching for Solutions in the South Bronx on the Upper East Side. WNYC. 23 January 2017.