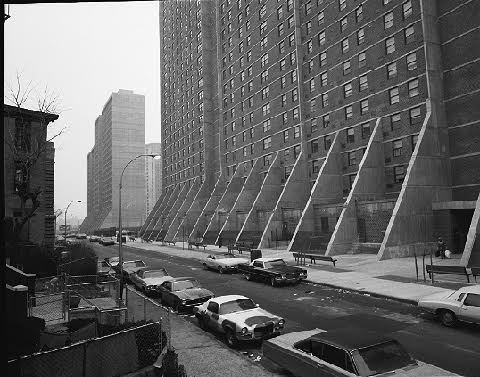 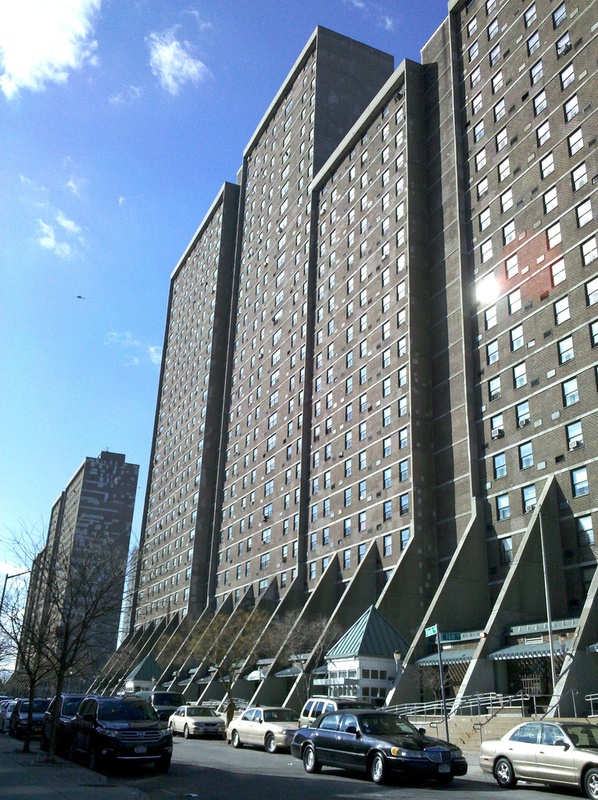 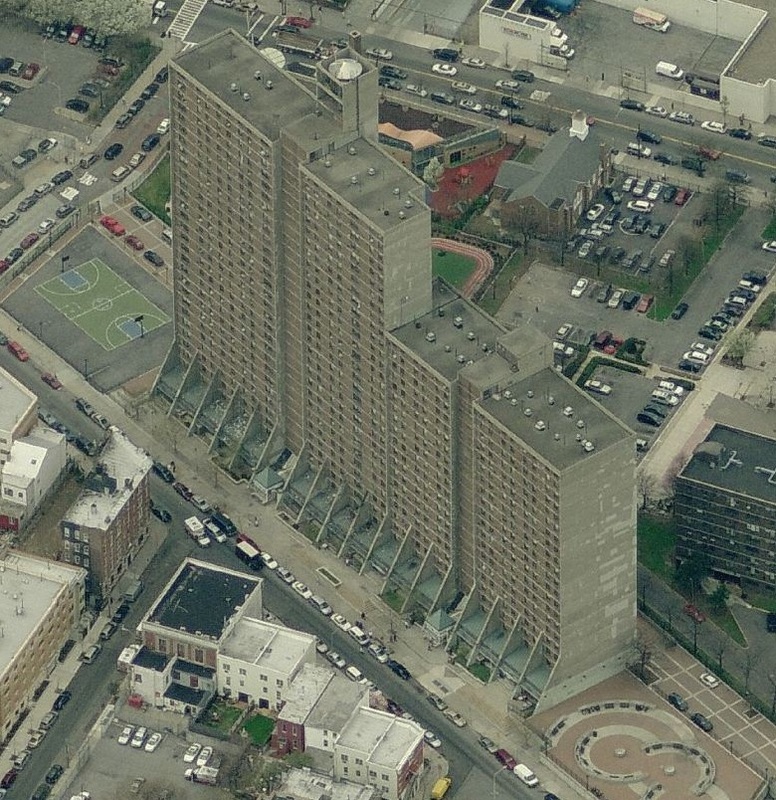 Morrisania Air Rights, view from above.

When the Morrisania Air Rights Housing was completed in 1980, it was the newest public housing development in New York City. The towers are located along Park Avenue, at around 160th Street in the South Bronx. Morrisania Air Rights is owned and operated by the New York City Housing Authority (NYCHA). Chaney explained that the buildings were initially privately owned and slated to become a co-op or condominiums. However, the developer ran out of money mid-construction and control of the project was turned over to the city. As a result, when there are plumbing failures, gas leaks, or other maintenance issues, “[the city] didn’t build it so it doesn’t really know how to fix it. So, they fix things as they break.” In addition, the towers stand directly on top of the Metro-North—the constant rumbling from below takes a tole on the buildings’ structure. There is no basement so instead, all pipes are in the ceiling of the ground floor, which is home to Chaney’s office and community meeting space. He explained to me that his primary role as president is to bridge the relationship between residents and management. When something breaks, he must hold management accountable for the repairs however, this is not easy. If a resident submits a ticket for a repair in April, it could be July before their problem is addressed [2].

The poor building maintenance at Morrisania Air Rights Housing is part of a larger story. One of the most infamous examples of a failure to maintain project housing is Pruitt-Igoe. Built in 1954, Pruitt-Igoe Housing was part of St. Louis’ plan for urban renewal. People were relocated from slum tenements to brand new “tower in the park” style high rise buildings. In The Pruitt-Igoe Myth, filmmakers provide a well-rounded view of what really happened to the project housing, and why is was demolished just 18 years after it was built [1]. Former residents attest to the joy they felt being the first to live at Pruitt-Igoe—the building was new, clean, everyone had a bed, and there was a sense of community. One residents said that,“At one point Pruitt-Igoe had this life, this engaging, electric life.” Soon after its construction this began to change in large part due to a lack of maintenance. Pruitt-Igoe was paid for with federal funds however, critics stipulated that no federal money be spent on maintenance and repairs. As a result, Pruitt-Igoe was left to deteriorate—incinerators, heaters, elevators, and windows broke but nobody did anything to fix them. There is another layer to the sheer neglect of project housing in St. Louis. As black families from the rural South and Latino immigrants moved to cities, middle-class white families fled to the suburbs. Pubic and private investment was focused on growing suburbia meanwhile, urban centers were left to deteriorate. Policies such as redlining and loan discrimination made it impossible for the working poor and minorities to move to the suburbs. Urban renewal took the same shape in the Bronx—slums were cleared, public housing built, and marginalized, impoverished communities were isolated and left to fend for themselves.

In 2017, public housing all of New York City, and across the country, continues to  suffer a similar fate to that of Pruitt-Igoe—the buildings have gone largely unmaintained for decades and as a result, pose a safety hazards and health risks to residents. NYCHA owns the majority of public housing in the city and is the largest housing authority nationally, with 334 developments that serve upwards of 400,000 people. Across the five boroughs, issues such as black mold infestation are common yet minimally addressed [2].

Established in 1934 as a part of  New Deal-era policy, NYCHA is a private corporation with a board, an executive officer, and complicated politics of its own.  As described in an article from the Observer,“an authority does not answer to the general public or to consumers but only to the official who appoints its executives and to whatever agency supplies its grants. In short, the authority enjoys all the advantages of both a public and private entity, but without the accountability of either” [3]. NYCHA’s structure, along with its amounting debt, has led to overall negligence. In attempt to reconfigure its revenue steam and adapt to the city’s real estate market, the housing authority has removed rent caps. Residents pay 30 percent of their income in rent, which creates vast inconsistencies in rent prices. Chaney explained that some people pay a couple thousand while others, a couple of hundred— “So, if you pay 2000 dollars, you’d expect better quality than the person who is paying 200 dollars but it doesn’t work like that.” The Morrisania Air Rights Housing is in better shape than many other NYCHA developments due to its relative newness. Chaney described a community that, while struggling to hold management accountable for building maintenance, is a desirable place to live. In Chaney’s words, their apartments are “enormous,” and everyone knows each other. Chaney’s experience in public housing for the past 36 years has been a largely positive one and he intends to stay at Morrisania Air Rights for as long as possible. However, the future of NYCHA is becoming more and more uncertain. Just a few months into his presidency,  Donald Trump has proposed $75M in funding cuts to the housing authority [4].

[3] Bredderman, Will. City on the Edge: The Problems, Policies, Politics and People of NYCHA. The Observer. 28 April 2015.